24 January, 15:034620
National Sport
Wine Run will be held with the support of the Tree of Life brand

A Super Fast Half Marathon, a Guinness Record, and a Way Out of Postpartum Darkness 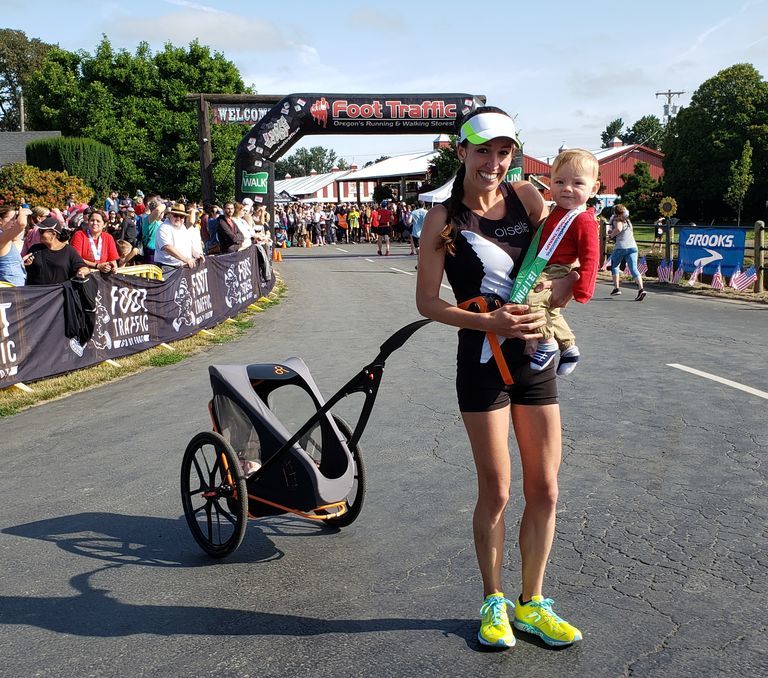 Everything about Lyndy Davis’s pregnancy seemed easy for her. After she qualified for the Olympic Marathon Trials by running a 2:39:06 in December 2017, she got pregnant within a month. On Instagram, she posted happy pictures of her runs with her growing bump, which included a 12-miler she did at 31 weeks. She kept doing her track workouts and even ran an hour on the day she went into labor.

That’s why the struggles she faced soon after the birth of her son, Quentin, in October 2018, came as such a shock.

So far, sleeping hasn’t been one of Quentin’s favorite habits. His first few months at his home in Portland, Oregon, some nights Quentin was awake every hour, on the hour, with Mom. “You’re just delirious in the night, nursing,” she said. “The trees swaying outside start turning into figures, you’re just so tired.”

Even though she was physically recovered from childbirth, Davis had essentially given up on her running. She was getting out only once or twice each week, and mainly walking. Her coach, Rick Lovett, saw empty blocks where she usually color-coded a Google calendar with details on her training. When her three-month maternity leave ended—she works full-time in marketing for HP’s online business—she reached a breaking point. Realizing what she was experiencing was beyond baby blues, Davis sought out a therapist to help her cope with postpartum depression.

In a recent blog post for her sponsor, Oiselle, Davis, 29, explained what was going through her mind: mourning her previous freedom, spiraling feelings of guilt for just about everything having to do with parenthood, and all of it compounded by exhaustion.

One major key to her recovery? Reclaiming running. She waited until Quentin was 6 months before they tried running with him in a jogger.

They took better to a new type of baby-transport apparatus: the KidRunner. She wears a waist harness and pulls Quentin in a stroller behind her, which allows Davis to have her natural running motion. And Quentin can see her at all times. Within days, they were running together for 90 minutes. (Davis has since become a brand ambassador for KidRunner.)

She targeted a race and had always admired the stroller-pushing Guinness World Record setters she had read about. The current world record for a woman pushing a baby in a half marathon is 1:27:34, set in 2016, but others have gone faster. Julia Webb, wife of American mile record-holder Alan Webb, ran 1:22:57 later in 2016. The mark was never ratified, however. In April, Lauren Stroud of Lake Jackson, Texas, ran 1:22:29 and won the race. That time is still pending.

By pulling her son in the KidRunner, Davis would need a new category (pushing a stroller is considered more difficult than pulling), so she contacted Guinness and let them know of her plans. At the July 4 Foot Traffic Flat half marathon on Sauvie Island, Oregon, she placed sixth overall in 1:21:38, which is 6:13 per mile pace. Quentin, now 9 months and 21 pounds, babbled happily along behind her before he fell asleep about half way through.

Her run was recorded by her husband, Zach, riding on a bike ahead of her with a GoPro strapped to his back and another observer on a bike behind her. She also had a witness running alongside—all to provide adequate documentation for Guinness. Davis filed for a record in the category of “fastest half marathon pulling a hands-free stroller—female,” which she hopes will be ratified in 12 weeks.

Having her baby be a part of the race made all the difference. “It really was like bringing together both worlds,” she told Runner’s World, “knowing that we were trying to do something together instead of having my old life, before the baby, be compartmentalized.”

Davis said she isn’t completely recovered from her postpartum depression—she rates her frame of mind at about a 7 out of a possible 10. But she’s learned a lot and has advice for other parents. 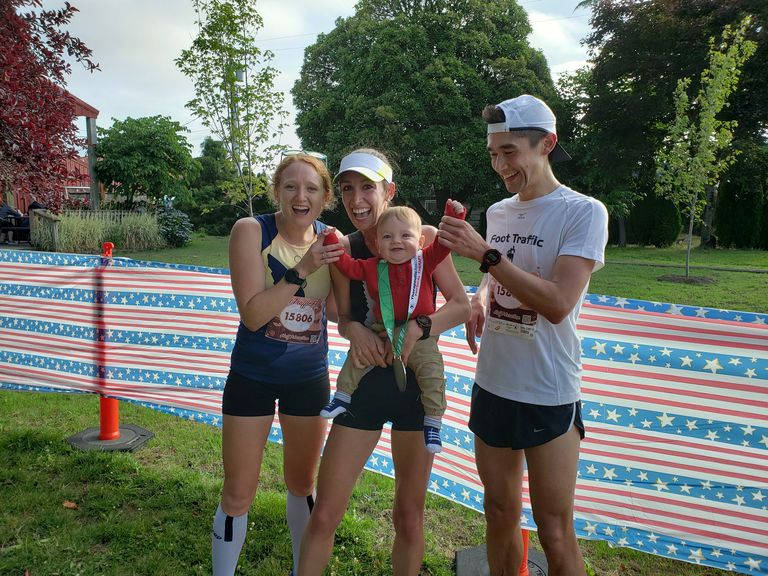 Find a way to do what you loved to do before your had your baby.

“Running is something that brings me a lot of joy,” she said “Sacrificing that when my baby came made me really sad. If running is a big part of your life, if you take that all away, it’s really crushing on your spirit.” Even if you find a way to get out every other day, for just a couple of miles at a time, it’s better than giving it up.

Be aware of how you’re consuming social media; don’t nurse and scroll.

“It’s a horrible combination,” she said. “I think it plays into the bad internal dialogue you have when you’re alone with your baby a lot.” Davis became more aware of how Instagram affected her, especially the dispatches from other new moms who were posting incredible workouts or boasting about their babies who were sleeping through the night. “It was very discouraging for someone in sleep debt and going through postpartum depression,” she said, adding that she wishes more elite runners would share their whole story, including the tough moments—the day they cut a workout short or the day the baby was was fussy or sick.

You can unfollow people, she says. And in retrospect, she thinks she might have been more careful about how she worded her own posts during her very active pregnancy, knowing that not everyone’s pregnancies go as smoothly as hers did.

A warmup shirt makes a great blanket for a baby in a jogger.

If you’re trying to get your infant to enjoy the ride, do a short warmup and then tuck your outer layer around him or her, like a blanket. Babies like the smell of Mom or Dad, and if that’s eau de sweaty runner? All the better—especially for the parents.
source link runnersworld.com
0

I Ran 400 Miles Through the Desert With 9 Strangers